Resistance would like the Stellar Horizon to capture or disable a Senfu freighter they believe is carrying food. The freighter will be on a parabolic course will will take it out of the ecliptic plane of the solar system and will show as relatively unarmed and be fairly easy to intercept. The ship will be relatively unarmed and pose little threat to the Stellar Horizon in ship-to-ship combat but will engage if provoked. The Stellar Horizon will be required to disable the ship and capture or incapacitate the crew of about 75 people without being discovered.

The cargo ship will be most vulnerable at a point in its course which is farthest away from the ecliptic plane. Though sensors will detect that the vessel has an odd course and it will be unclear why the Senfu chose such a course.

The freighter is indeed carrying food and medical supplies but also carrying weapons designed for non-lethal engagements, such as tranquilizers, restraints, flash-bangs, and other such things you’d want to use to capture a large group of people by force.

In addition, if the Stellar Horizon searches the vessel’s cargo holds they will find the ship contains Heibo prisoners frozen in suspended animation who have been the subject of biological experiments. The exact experiments are unclear but it is clear that they are still alive and have been subjected to drug and surgical testing of some kind. The only way to find the above is to do a manual search, though there will be a hint of that search being necessary as some of the sections will have extra armor and be shielded from the inside to prevent scans.

The crew does not know about the additional cargo but there are strangely no Heibo on board even though it is clear that the crew is upset at not being able to bring able to bring their servants. They are all military personnel and will put up a fight if boarded, being well armed, and having the tactical advantage as they know the vessel and have control of it internally.

The crew will not surrender unless forced to and would prefer death. 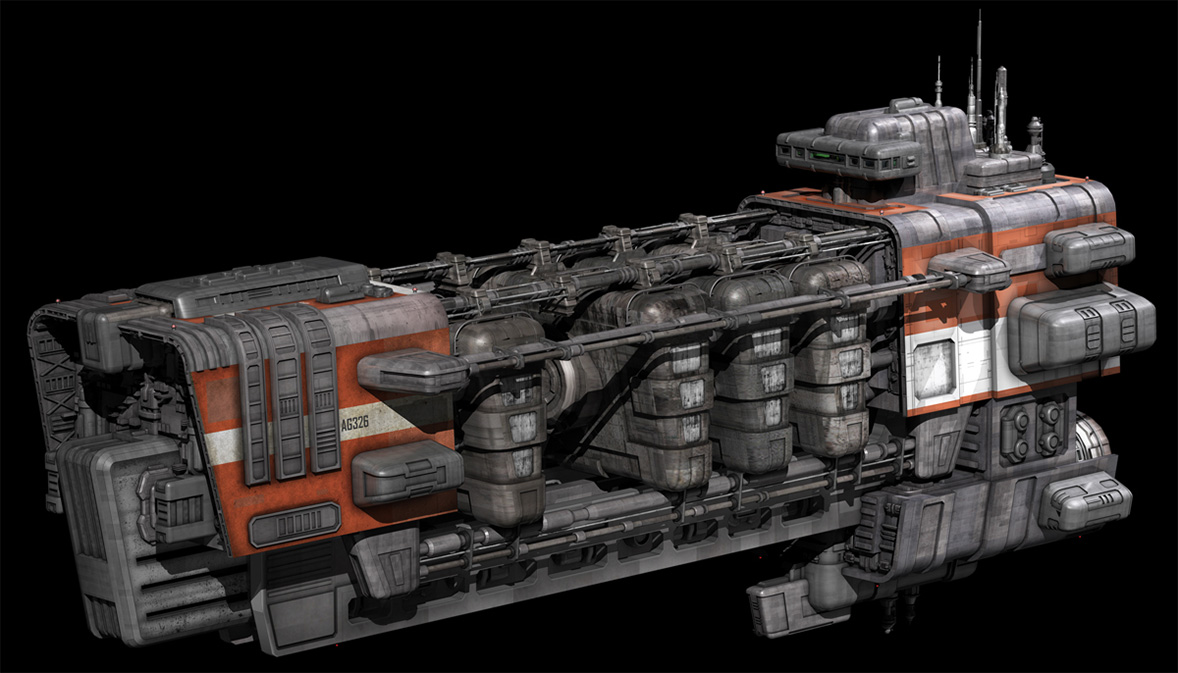 This is the basic shape and size of the ship. The bridge is at the top in the back. The middle section has removable cargo modules all connected by a central access conduit. All modules have to be connected to allow the conduit to go from one end of the ship to the other. Communications array is directly behind the bridge.

The ship does not have superluminal capabilities and instead travels at sublight speeds using a primitive form of impulse power provided by deuterium fusion reactors. The drive is similar, if not as sophisticated, as impulse drive for Solas Tempus or Federation vessels employing subspace driver coils to provide better speed and some better maneuverability but is not warp capable.

The hull of the ship is heavily armored but the cargo modules are not. The ship has lasers, pulsed plasma cannons, and plasma torpedoes.

The biggest threat is the pulsed plasma cannons which are at the front of the ship and will inflict damage on the ship and shields of the Stellar Horizon. The plasma torpedoes also provide some threat, but it is marginal. If one were to hit the ship unshielded it would cause moderate damage and repeated impacts could cause significant damage. Shields will be able to soak a fair amount of damage from the torpedoes and the lasers will not be an issue.

The freighter does have some deflector shields but they are weak by comparison to the Stellar Horizon and even the transporter can penetrate them at close range.

Major cargo is in the cargo modules in the center of the ship with the access-way running through them. The ship will be encountered full. There is no artificial gravity within the cargo modules and cargo is strapped and secured into sections in groups much like one would see on an airplane. There are lights in each module.

There are a number of smaller cargo bays, most of which are used for the ship’s own provisions, spare parts, and other such things. The living quarters is in the middle of the rear section of the ship along with sickbay. Security and the armory are above that below the bridge. Engineering is toward the rear of the back section spanning most of the height of the ship.

Weapons control and an auxiliary control room are in the nose of the ship.

The ship is not designed for comfort, at all. Everything is spartan and the construction suggests that the vessel cannot be spacious because of the technological limitations of construction. The space-frame is a titanium alloy and much weaker than duranium or tritanium that Solas Tempus / Federation vessels are constructed from. Even so the ship is very structurally sound just much bulkier. The space frame is well engineered and can withstand quite a lot of physical stress.

The Stellar Horizon sensors should be able to locate most vital ships systems easily.