All @command personnel are sent a message requesting if they would like to participate in an experimental new type of torpedo, specifically designed for heavy assaults. They require a testbed with high capacity shields and very fast engines.

This is open-ended, but requires the other player to have a starship.

The Lilith soon enough answers, the hologram of Neo showing on screen eventually, who’s standing in a straight posture.

“Akazuli with the Lilith reporting for testing.”

Neo isn’t familiar with the person with whom he’s meeting, by the uniform he is an officer in Gold Team (research arm). He smiles at Neo, “Good day Captain, how are things there in the Schatten system? From what I’ve read it is a very active sector of space.” The man’s hologram indicates his name is Commander Allen Graham but the man himself hasn’t said yet. He’s well put together, but a bit on the portly side for your average officer, it is likely he spends a lot of time doing research rather than the more exciting tasks. The signal shows it is coming from the Ronin Shipyards in the Markab Star System.

Neo nods twice, shortly.
"It is indeed, Commander. Against occasionally appearing complications, we do manage to keep things at bay."
Neo says, shortly and a bit dry, with serious tone. Neo’s hologram keeps its straight posture, and it looks at the Commander.
“How are things in Markab ? I’ve read that it’s a rather calm sector.”

OOC: Isn’t Neo in the Schatten system? Did he just ask how things are there?

Neo nods twice, shortly.
“It is indeed, Commander. Against occasionally appearing complications, we do manage to keep things at bay.”
Neo says, shortly and a bit dry, with serious tone. Neo’s hologram keeps its straight posture, and it looks at the Commander.
“How are things in Markab ? I’ve read that it’s a rather calm sector.”

“It is,” the man says, “And we like to keep it that way. Though I know a lot of people who would like the faster paced kind of life that you’ve got over there. That brings us to the reason you’re here…” he taps a few buttons on his console and a hologram appears for Neo that shows an experimental missile design, “We retrieved this design from the main computer of a derelict Galor Class cruiser that was lost in the early days of the Dominion War. We found it adrift and badly damaged floating just beyond Cardassian space.”

The design is of Cardassian ATR-4107… 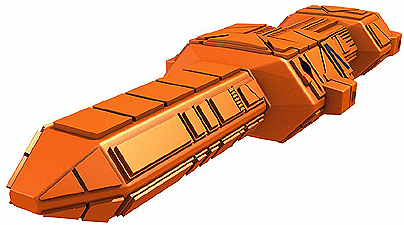 “We have begun work on our own prototype version of this device.”

Then the hologram changes again as he talks, “This is the Mark X Autonomous Long Range Weapon or ALR-X Prototype.” He continues after the hologram appears, “It is designed to be fired lightyears away and navigate itself to a target. The final version will be equipped with a cloaking device and the version already has a number of its own onboard weapons systems.”

The missile appears to be so large that it cannot possibly fit inside a launcher, and rather would have to be launched from the surface of a shuttle bay of some kind. While it has no accommodations for crew or a pilot, it has a control just behind the warp coils and matter/antimatter reactor, which allows a person to enter the missile and program it, maintain its components, and do various other things. The device is not as large as the Cardassian missile, however, being about 25% smaller.

Neo analyzes the holograms while listening to the man’s explanations. After he came to an end, Neo nods impressed.
"Lightyears away with cloaking device? Good combination. I’ll assume this is what you want to be tested?"
Neo says, while already thinking if the Lilith could bear such a test.

He nods, “Yes, at first the warhead will be simulated and we’ll be testing the autonomous guidance system. We’ll have to outfit the Lilith with a special launcher, likely fitted into your main shuttle bay, to server as a test bed for deploying the missile. Then the Lilith will follow it and monitor its systems as we have it face various navigational and sensor challenges.”

Neo nods again.
"We’re on our way. Captain Akazuli out."
Like this, if Graham would not stop him, the channel is closed by Neo and Neo’s hologram disappears.
On Neo’s side, he’d give appropriate orders to leave the Schatten System in direction to Markab.
The Lilith’s warp engines light up blue, and it’d be gone. After suitable time in warp, the Lilith would appear in the Markab system in safe coordinates and start to make her way towards Ronin shipyards. She hails the yards.
"This is the Lilith for outfit with experimental systems."
Is the message ronin would receive.

A rather nice looking woman appears on the screen, “Welcome to Ronin Shipyards Captain, we’ve been expending you. Sending you coordinates for the docking facility now.” His helm officer can confirm that they received the coordinates. This particular docking facility was secluded from the others of course. The Lilith would be allowed to park herself within the dock and after a moment, they would get a signal to power down their engines, once they did a tractor beam would hold them in position while the docking arms connected the umbilicus for power and life support.

Thrusters flare, as the Lilith moves to the designated coordinates and park in.
After receiving the signal, the Lilith powers down its engines.

Ok, so your call here, we can fast forward to testing or have Neo kind of move around the Markab system here and there.

The crew was ordered off the vessel for the refit, and Neo was handed a PADD detailing crew members who did not possess the security clearance and would have to be left behind on leave during the testing. There was no one critical, but the list was more extensive than one would think. After all of that, Neo was told, “We have a shuttle waiting to take you to Trocara, or if you’d prefer Glacia?”

Neo gives the appropriate orders for his crew without suitable clearance to leave the vessel as soon as possible. However, he decides to take the shuttle to Trocara.

He passes by the massive space-dock, with the bold logos of Solas Tempus and the Serenity Concord on the space dock doors, the name of the station reads as Starbase Tranquility, odd that a short-hand would be the now famous name of Tranquility Base, something every student of early Earth space travel would know about. The pilot gets clearance to descend and after a short re-entry he lands at the Solas Tempus facility on the planet. It is polished, well kept, and absolutely artfully done. Somewhere between building and work of art.

The world itself is everything one would hope of an M-Class world, it is bright, sunny, and green. There are well kept walkways through gardens and grass everywhere, a celebration of different form and color of local flora… Neo can go anywhere he wants, but after he is let off the shuttle, a friendly ensign does ask him if he wanted to see anything in particular?

Neo looks around, taking in the facilities design. Upon asking him if he would want to visit anything in particular, he’d say, after a short amount of thinking, that he’d be interesting in the Lost to Time Memorial.

The ensign tells him how to get there in an appropriately solemn tone. It would not take Neo long to get to the place, when he does he finds it to be a fitting memorial. Though at first Neo goes in and finds the museum. There is a history to contemporary time travel, it shows artifacts of early testing of the concepts. Biographies on the important people involved in the practice. There is even a section on myths and legends.

After that, when Neo is done there, is the library. Structured like a law library for much of it, involving books from the legal, theoretical, to the fictional. There are a lot of physical books and even artifact-books, which suggest that those of the past have encountered time travelers before.

The entire area is lit by most natural light. Daylight spills in from everywhere, augmented by artificial lights to dispel the shadows. Glass and windows are set up to reflect the sunlight and make the most use of it.

Neo strolls causually through the halls, looking at artifacts here and sparing a look at the books there. He’d stop by artifacts of particular interest for him, mostly just because they look interesting or a label caught his attention, completely at random.
After he passed through the room with the artifacts, he remains casually walking and goes through the area with the books, also stopping here and there and sparing a brief look at the books. He just does that randomly too, mostly.
Then, he’d make his way into the actual Memorial.

The actual memorial was grand… Marble, plaques dedicated to those who’d lost their lives… The chamber was quiet, so quiet that footsteps seemed to echo loudly. More than one would have thought were here. If he looks at the dates, he saw that especially in the early years, this job was quite hazardous. Many of the earliest members who lost their lives were also quite young. Probably before they had a good idea of how to train someone to be in the past and stay out of trouble. There were also notations… Dead… Missing… And then another one, Left. Not many had that, but it was there. Of course Neo had heard of it, Operatives who had to be left in the past for some reason. Most of the time it was some sort of nervous breakdown and they Operative “going native”, believing their cover story. But the plaques didn’t say why.

The marble tile floor was emblazoned with the Solas Tempus logo. The motto was embossed also in marble along the top of the room. Most recently, Candy Poole, was listed here. Her plaque’s dedication read, “Lost, and found again. Never to be lost again, even in death.” An odd epitaph.

Neo’s suprise upon discovering the quiet young age of his fellow, dead operatives is big and notable, since he makes no effort to hide it.
"Here I am, Neo the old man."
He chuckles at the thought.
"Fate has a strange sense of humor."
Then, he reached the plaque of Candy, where he stops, silently honoring the former Fleet Admiral for a few seconds.
Then, a thought comes into his mind.
"If fi’s watch is here, too?"
He’d roam the memorial in an appropriate manner, and looks for Fi’s plaque.