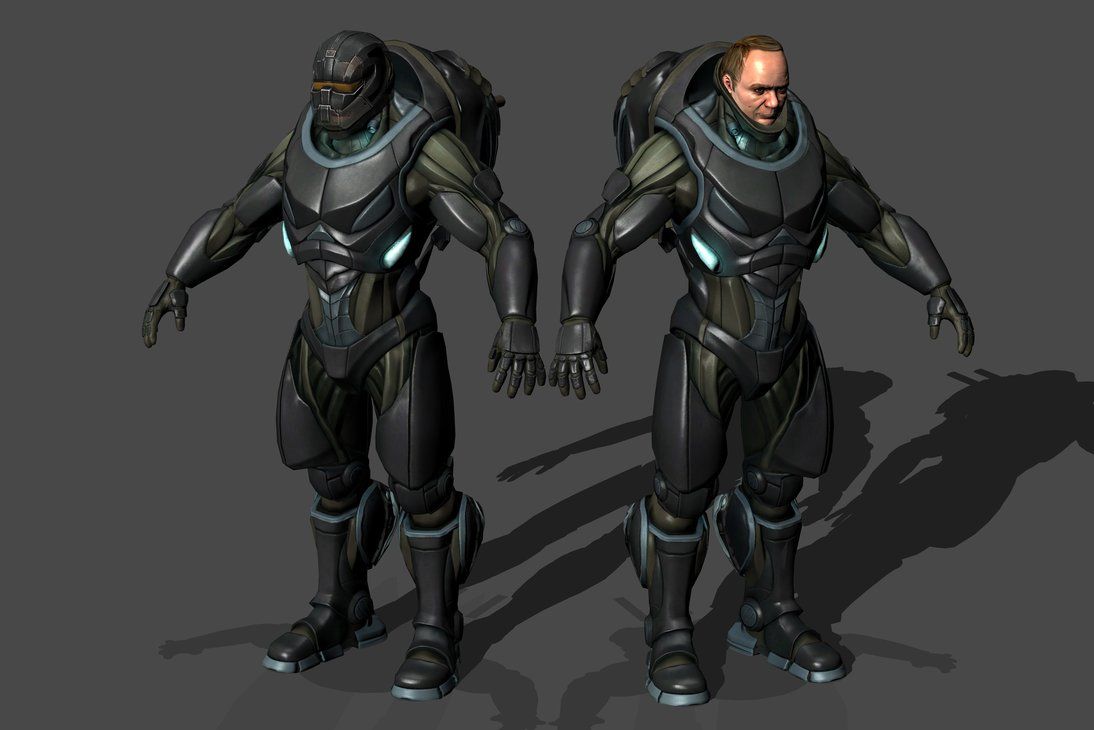 the ArchAngel MK 4 armor is an upgraded version of an old design for Archangel Armor design which was introduced by William / Xoshkic Fable and after additional upgrades and work the suit has become a staple for his TACCOM squad, Squad 7. These armors have been given the nickname by many as BlackAngel armor, mostly due to their coloration and use in the various mission types that TACCOM teams are sent on.

This suit is designed to be fully seal-able., allowing them to work in both hazardous, and non-atmospheric environments. The helmets have a built in re-breather system, to make oxygen use more efficient. As part of working in hazardous and non-atmospheric environments, the suit is equipped with a two piece jet system, allowing them to both maneuver in space and in the air with relative ease. While the suits cannot match high speed craft in speed and acceleration, a skilled user can give such craft a challenge. The suits are also equipped with a grappling hook system and mag-lock boots, allowing them to function in zero-G or boarding a ship through their hull. This also can allow the users to participate in combat along the exterior of the ship. 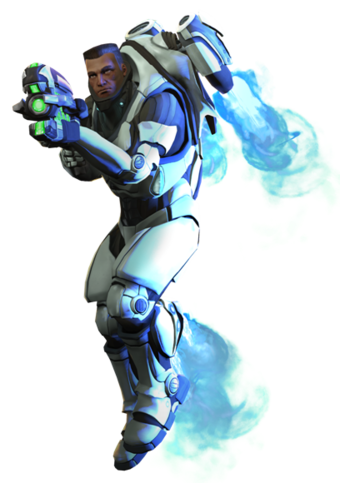 (Example of the two piece jet system when active)

The armor plates use a durable alloy material and provides adequate defense for most combat situations. During tests the armor has been able to withstand light and medium rounds. Tests have shown that anti-infantry rounds can pierce through the armor in up to two shots in the torso area. Armor piercing rounds can still prove very effective against the armor plates.

The nature of the armor has resistances to energy, however those resistances is pretty limited, the suit can take a few hits from energy weapons, such as laser (phaser) and plasma weapons, with minimal damage, however resistances to other weapon types are weaker. Requiring different tactics in combat.

A basic power system powers certain functions of the suit, such as life support, and the flight systems. While both do not require much power, it can take a little while to recharge the flight batteries which power the thrusters and engines. These are the primary power draw, as the life support system is fairly passive.

The suit is equipped with a specialized life support system to allow them to handle dangerous environments, and use rebreathers for extra efficiency, this allows the suits to handle non-breathable environments very well, the suits can also have an extra external tank connected to it for extra long durations. When re-exposed to a breathable atmosphere, the suit will vent any CO2 build up and recharge the built in life support system… in essence the suit appears to breath when it’s able to. The suit without an external tank is estimated to last for several hours before running low on Oxygen. With an external tank, it is estimated that they can last a day before needing to resupply.

The two piece flight system is a modified version of the original’s jump jet system. And allows for sustained flight for up to 30 minutes. 15 if at pursuit speeds for an extended period of time. After the time period the suit takes some time to recharge the engines and thrusters.

The suit’s design does slightly enhance the wearer’s strength and speed, although not to the degree as some other suits of armor or hard-suits.

The suits use an encrypted shared communication network. Each individual suit can link up with each other connecting their sensor systems and making communications easier and harder to be disrupted. The sharing of sensors, allows them to cover each other easily, and move when targets are identified by one, all other members of the team also see those identified targets.

The suits use unique a range of different sensors. The sensors feed directly into their helmets and HUD system. This sensor system uses a proximity and region mapping system, to help users in their missions.